I headed out to activate Mt Kalkite on the Saturday 27th March 2016. It was a fine day and I was expecting to activate two Summits: Round Mt 2 on the return from activating Mt Kalkite. My plans wen…

I headed out to activate Mt Kalkite on the Saturday 27th March 2016. It was a fine day and I was expecting to activate two Summits: Round Mt 2 on the return from activating Mt Kalkite.

My plans went into disarray as I will explain. I had been into this area the week before (Activation blog will follow). The previous week I had been able to drive right to the base of Munyang Mt; this was unusual, normally you would have to walk 8 km to the base of the summit, this time the boom gate at the Gungarlin River bridge was locked .

This meant I was going to have a very long walk: my plans to activate 2 summits for the day quickly faded. I had previously activated  Kalkite and Round mt 2 in 2014. On that occasion I used a mountain bike, which really took a lot of the slugging out of the trip.

I left the Home qth at around 7am  and drove to the take off point: just on 2 hr from home. I know  now why the gates were locked on the Island Bend Fire Trail: it was the Easter weekend and there were 20 odd camping groups at the Gungarlin River bridge camping area.

I should have realized in hindsight that it would be a busy weekend and that Parks would have locked up the area.

So  resigned to head off and walk down to Kalkite Gap and Activate Kalkite Mt and see how the time would pan out. I made good progress on the walk to Kalkite. It took me roughly 2.4 hrs to reach Kalkite Gap  to the point were I would make my ascent to the summit: it took me about 40 min to climb to the summit. What really  helped was that a fire had gone through the area burning off by Parks the previous year. It had done a very good job most of the scrub was just a few burnt roots left behind it made for good going. The last 150 m of the climb there are some large Granite tors. Interestingly you have gaps between them that you can easily navigate through there were several of these on the way up .When you arrive at the top you can really only find one flat area that is ideal for a shack the point is 20 m from the trig but well inside the activation zone.

The trig and best viewing point is a clump of rocks – its a shame that it is not suitable at all to set up there .

Looking back across the bridge at the Gungarlin River. Note the locked gate and the campers 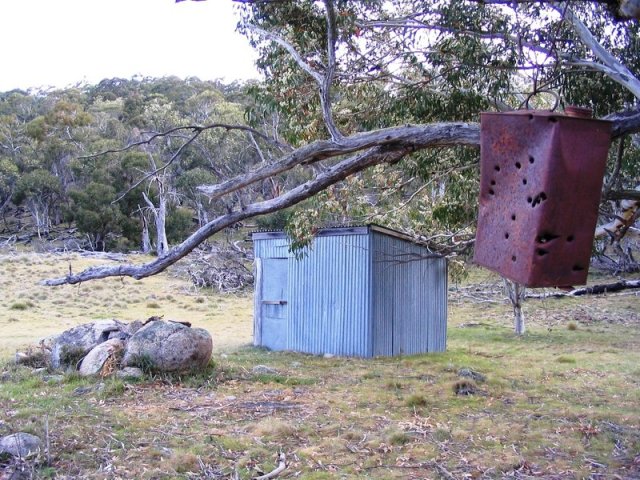 Looking back across the Ford at the Gungarlin River.

After crossing the river we head on for another 5 km along the Botherum Plain: beautiful Alpine country.

This is a very special part of the park. I have been coming into this area since I was a kid  we used to take boats from Jindabyne and walk to the gap and then up the Botherum Plain. Below is a shot towards the gap. Kalkite is the furthermost you can see. It gives you a good idea how vast is this plain area. There are several grazing leases on these plains. 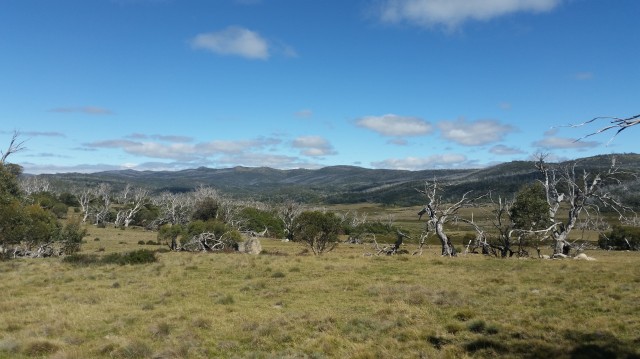 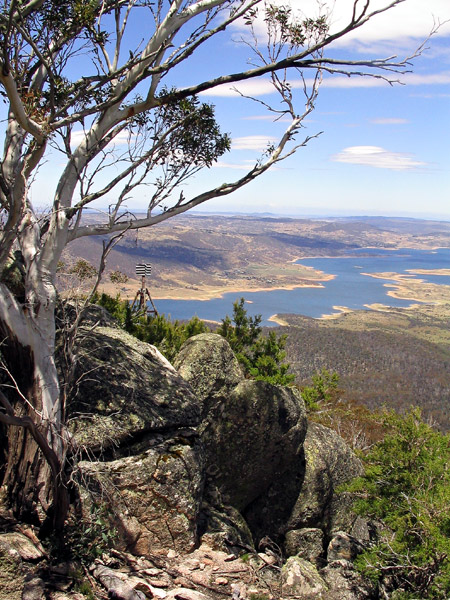 put mine on a flat area 20 meters to the right

Stations worked with conditions on 40 superb

The Summit VK2/SM-002 is the best of the highest summits in Australia in my opinion.  It has been my favorite Summit since I can remember and its a thrill to come back to it and be the first to activate it for SOTA.

I left Charlotte  Pass at 6.30am parked the car and headed up the road towards Seaman’s hut the distance was 8.5 km.   I was wise to start as early as I did as it was going to be a hot day.

As you climb up the road towards Mt. Kosciusko you see the panorama of the Main Range opening up.  It is cool and quiet,
most people are still in bed.   I comfortably made Seaman’s Hut in just on 1 .30 hrs.  I walked on another 35 mins to were I parked my mountain bike.  There is a bike stand quite handy so you can secure your bike to the rack.

My intention at the time was to use the Main Range trail – this trail will take you right across the top of the main part of the range and back into Foreman’s Creek below Charlotte Pass.  This is a very popular walk for regular bush walkers, you see quite a few walking the main trail.  The turn off to the Main Range trail is about 200m from the bottom of the track up to the Summit of Kosciusko,  you turn right and drop down a long descent of some 400 meters.  At this stage I was thinking about the return later in the day,  I have since worked out a more direct and better track to use to go to Townsend which I will elaborate on further in this blog.

I reached the bottom of the saddle at Mueller’s Peak which is next to Townsend.  I had skied into this area with my father to do snow surveys many years before to the Club Lake snow courses, so it was quite  different  in summer but I still had my bearings.  I could not find a clearly defined track leading off towards Townsend so I went around the right side of Mueller’s for some distance and finding no track I retraced my steps and started to move around the side of Mueller’s.   It became very slow going,  I could see the Club Lake snow course poles and worked towards them, it took me lower into the valley and I got to a point were was looking straight up into the saddle between Mueller’s and Townsend, still a pretty healthy climb.  The 400 m I had dropped into the valley plus the extra 170 m to the top of the Summit of Townsend.

I stopped near a small stream and had my lunch it was 0012 knowing I would take at least another 1hr comfortably I headed up the spur towards the saddle it wasn’t too bad. the going was reasonable

After 15 minutes I came upon the trail that I hadn’t been able to find earlier (I later found the cairn to mark the start of the trail was some 50m off the track)  20 minutes later I was climbing into the base of the Summit it was very rocky with huge slabs of granite thrown together thousands of years ago in a huge pile, it was something to be careful climbing to the top of the summit you had to scramble up to the top over these big slabs of granite.   Once on top of SM-002 you are treated to one of the best summit panoramas on the main range.  I hope in the photos you can see some idea how breath taking it is.  I set up just below the summit some 15 or so meters as it was blowing hard.  The spot I picked is a tussock knoll in between some huge pieces of rock there was a Weather station cum trig there initially in the late 50s removed some time in the 70-80s.  There are 4 hardwood posts left behind I used one of these to secure the squid pole.  My first chaser contact was at 0312 all up I worked 12 chasers  and it quietened down after 35 minutes  so I packed up and headed off.

The bridge over the Snowy river just below Seaman’s Hut

Looking out towards Khancoban from the summit on the return trip followed the trail I had branched onto coming up.  Progress was good for the first 40 minutes then it started to zig zag around rocks and made the walk slower.  I had been having trouble with my knee on these descents on some of these higher peaks lately  so I slowed down.  The marking of the track was poor with small piles of rocks every so often, these cairns were often hard to see, you had to look for them amongst the grass and rocks until you picked up the trail again.  The Geehi Walking group usually mark all these important trails.   After doing some tricky navigation I made my way around the side of Mueller’s Peak.  The take off point of this trail is not worn or visible from the Main Range Trail, there is a large flat rock sitting 50 m out to the west of the trail at the bottom of the trail.  The Park should put a sign to mark the trail to the second highest peak in Australia.

I was very pleased to find my bike waiting for me and 15 minutes later I was back at Charlotte Pass after and exhausting but enjoyable activation that took all day.  I recommend this one though, hope the above helps other activators. 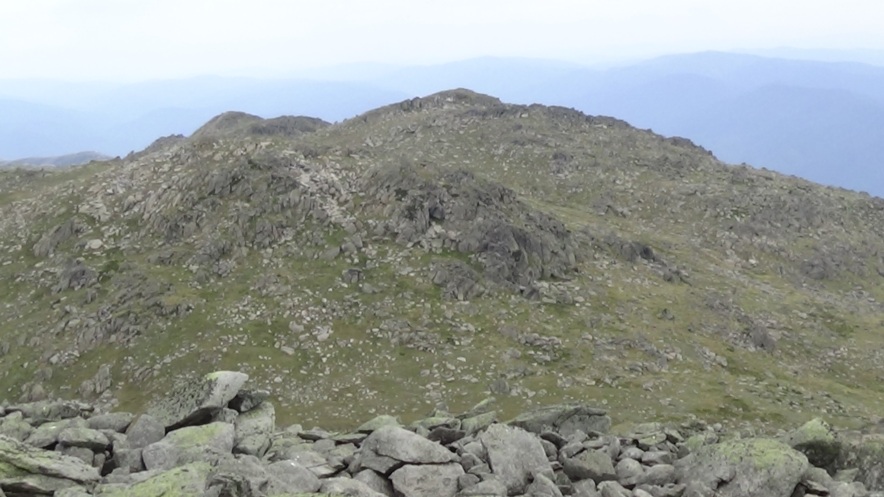 The view towards the North and Mt Twynam

Sota in the Southern Alps

last October I had a ham radio friend of many years Peter Vk3 PF come and visit us for a long weekend .Peter had come to show me the ropes  Activating Summits  quite a bit to it and over that weekend I became quite taken with it all we aimed to climb and activate Mt Kosciusko we drove to Thredbo and then took the main Chairlift to the top of the mountain from there we had a to walk 7 ks to climb the summit

above is a picture of Me taken by Peter next to the trig note squid pole at a giddy angle you can see there was still snow on the surrounding Peaks surprisingly there were quite a few tourists climbing up onto the summit  it was quite windy we spent about and hr and then started back towards the top Station of the chairlift we had to be there by 3.30  we didn’t